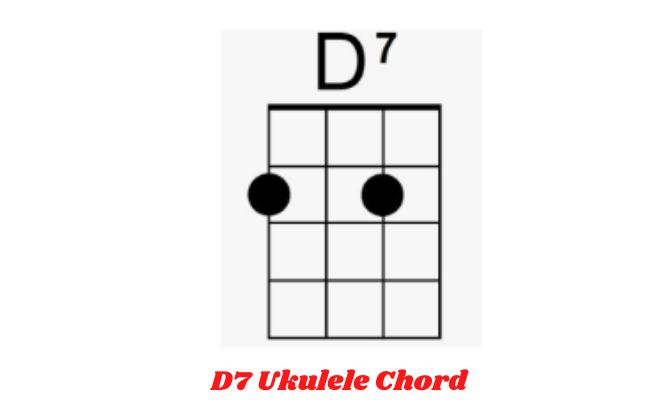 The 7th chord on the ukulele can contribute to adding more dimension to an ambitious player’s career. They may use it as a bluesy touch at a significant point of a song. Honestly, the seventh chord can be a fruitful beginning point.

In this lesson, we’ll talk about the notes consisting of the chord, several ways to play it, and how this chord adapts to some songs.

How do you Play the D7 Chord?

The D major chord consists of the following four notes:

This chord is comprised of using the D major triad (D, F#, A) and affixing the 7th above the D root note: C.

How to Play the D7 Chord on a Ukulele?

In truth, you can use several approaches while playing the D7 chord on the uke.

We’ll show the placing position of your fingers on the fretboard and also what string you will ring among four Strings to play various versions of the chord, utilizing charts for every chord change.

For beginners, an overview of the four strings is below and also how we refer to them:

In reverse to the guitar, while strings are arrayed in order from lowest to highest, the third string is the lowest-toned string on a ukulele.

Indeed, the images indicate a ukulele fretboard, and the icons or numbers utilized will highlight where to position your fingers on each fret or how to strum a certain string on a version of a chord:

O = A circle above the string implies that you should play the String in an open position.

X = An “X” above the strings implies that you don’t need to play that string or keep it muted while playing. 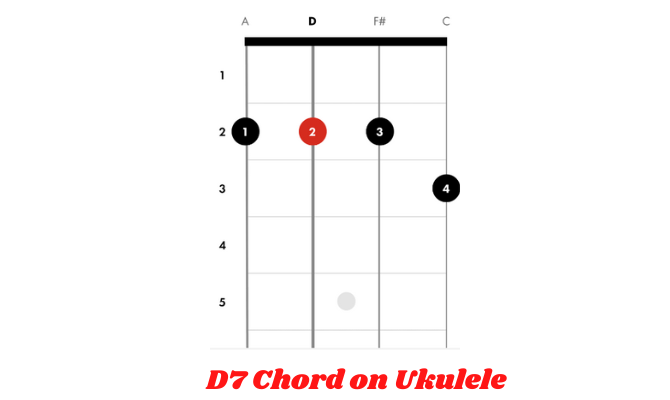 To play the D7 chord, one of the most fundamental approaches is that you need to extend the index finger across the 2nd fret of the 3rd string to create a “barre” chord. After that, utilizing your mid-finger, connect the third fret on the first string. Those positions are here: 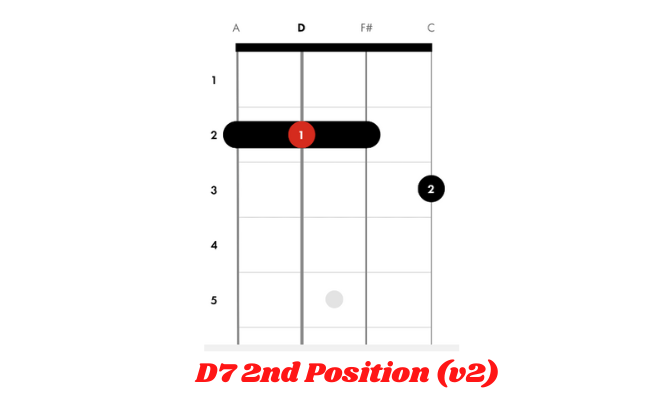 You play all four strings at the same time, ensuring that you are clamping just tight enough to close the second fret so you may listen to every individual note. Observe that the added seventh works as the last note at the lofty edge of the chord.

In the case of feeling problems with barre chords, you might strum this same chord in an open position utilizing one finger for each note:

D7 Open Position (v1) for the D7 Chord on Ukulele

This time let’s move to the 2nd approach of playing chords. In this version, there’s a bit different sound. In the case of facing problems with the above chord version, this version likely becomes somewhat more fundamental, as it uses two open strings. The following ways you can use to place your fingers. 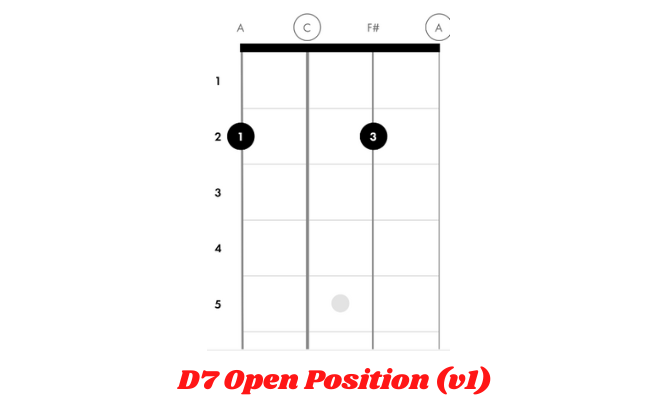 Again, you play all four strings, confirming that you arch your fingers by pushing down on the second fret. This arch will let room for the open strings to play effortlessly so that your fingers can’t unexpectedly touch the open Strings and make their sound dull.

You might attempt to use your middle finger instead if you don’t feel as cozy utilizing your ring finger on the E string. Perhaps, you’ll observe just now how separate this diversity is from the previous version.

After trying to play through these three varieties of the D7 chord and feeling comfy with at least one or two of them, it is significant to sustain the D7 chord-related knowledge by mastering how to use them.

You’ll then become capable of working on the metamorphosis between D7 and other chords and listening to how they seem to sound within your knowing song structure.

To start knitting your learning of the D7 chord on the uke into music, let’s begin the journey with a rockabilly classic, “That’s All Right.” Elvis Presley revived this song (basically composed by Arthur Crudup) in 1954 with his uptempo presentation, revealed as his first solo on Sun Records, and reached him into star fame.

This song’s verses mainly run on the A major chord, but the transferal to the D7 chord shows a significant change every time it happens.

For a song that becomes more challenging and has a few more chords, let’s keep eyes on “The Bare Necessities” from the 1967 Disney film “The Jungle Book.” The D7 comes in a complex section of rapidly changing chords. Hear how it seems to sound, encompassed by several other seventh chords like A7, G7, and C7.

It needs time and consistent practice to fully master the D7 and other chords on the uke. It becomes easy to learn others using similar shapes if you spend time familiarizing yourself with these chords.

Attempt to learn other 7th chords, such as G7 or C7, and then continue your practice transitioning to them from the D7 shapes mentioned above.

Hopefully, this lesson will stand by you to master the way of learning the D7 ukulele chord.