How to Play the E7 Chord on Ukulele

The E7 acts as a multipurpose uke chord with a punchy sound, bringing your playing to life. In this guide, you’ll master making the E7 ukulele chord unparalleled and playing it in different positions. Also, you can play a few songs while practicing this new chord. Now, hold your ukulele and be ready to play!

The E7 chord on the uke consists of four notes:

If you have learned the E major chord, you will observe that the E7 chord remains almost identical but with an extended note. The E major chord consists of the root note, the major 3rd, and the perfect 5th of the E major scale. The E7 chord has the same three Notes, plus the 7th of the scale.

This chord offers a distinct, jazzy sound due to the addition of 7th notes. You will face the 7th chords in all genres of music with rock, blues, jazz, and pop. These are frequently utilized in transitions or used to lead to the resolution of a chord progression.

Despite being able to play the E7 chord in various ways, you will only play these same four notes in each position.

How to play an E7 Chord on the uke?

To delineate the way of playing the E7 ukulele chord, we will take the help of some ukulele chord charts, as well as break down every chord’s position and accurate finger placement. The chord charts of the ukulele represent the four strings on the fretboard of a uke:

Opposite the guitar, where the strings remain in descending order, the third string is the lowest-toned string on a uke.

There are numbers and other signs on these charts, which will indicate where each finger of your hand needs to place correctly for playing the chord.

We will point out three separate positions so that you can play the E7 chord with correct finger placement. 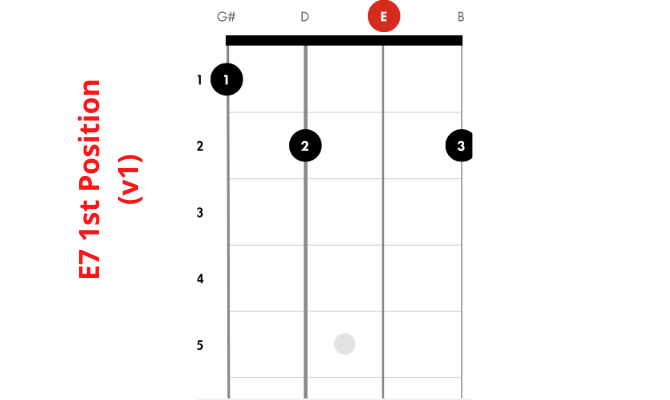 Now, you strum all four strings and make sure that the open E string is not muted.

For the E7 chord in the 4th position, you need to barre the G, C, and E strings at the 4th fret using your index finger. If it becomes easy, you can move on and just barre all four Strings here. After that, put your middle finger on the 5th fret of the A string, just like the following:

Middle finger: The fifth fret of the A string and Index finger: Barre all four Strings at the fourth fret 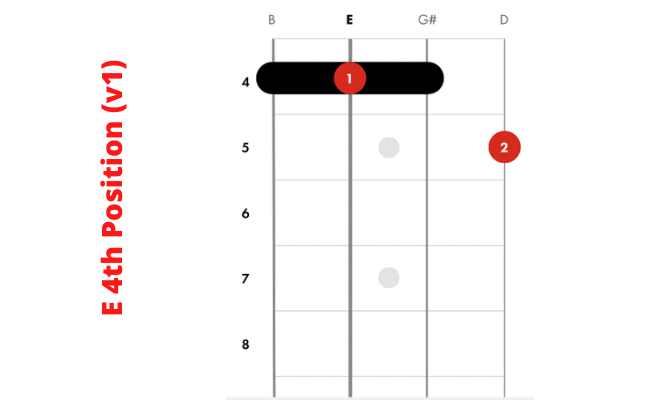 Again, if you intend to play the E7 chord in the 4th position, you strum all four strings.

Several songs that use the E7 to sing

Learning any new chord in a song is one of the best ways to practice it. Musicians use the E7 chord in various kinds of music, and it can affix a pompous punch to chord progressions featuring major chords like A, D, and G.

If you play songs containing the E7 chord, it’ll aid you in practicing the transition in and out of this chord. Besides, it’ll teach your ear to be acquainted with the unique sound of that particular chord.

Now since you can play the E7 chord on the ukulele, you can attempt to strum along with Ben E. King’s classic “Stand By Me”. This song also has chords like A, D, and F# minor. Further, you can begin an unstoppable singalong each time while playing it.

On the other hand, the E7 chord suits rightly Twenty-One Pilots’ “Stressed Out”. The song also contains a few more chords, including F, D minor, C, and A minor, and further, a fun strum pattern consisting of up-strums.

It’ll surprise you how wonderfully Twenty-One Pilots’ brand of hip-hop-infused alternative rock can translate to the ukulele. Then, you’ll notice how the E7 chord contributes a pivotal role in transitioning to this song.

It might be a snap to master the E7 chord on your uke as long as you keep on practicing regularly and paying attention to correct finger placement and technique.

In addition to practicing playing these necessary chords, you’ll make muscle memory so that you can soon feel simple, natural, and funny to play the E7.

If you can master this chord once, you will wish to learn even more chords. Apart from studying this guide, you can visit other online lesson sites to know more. But hopefully, this lesson will help you meet your needs.

Finally, you can learn this chord by watching this video.