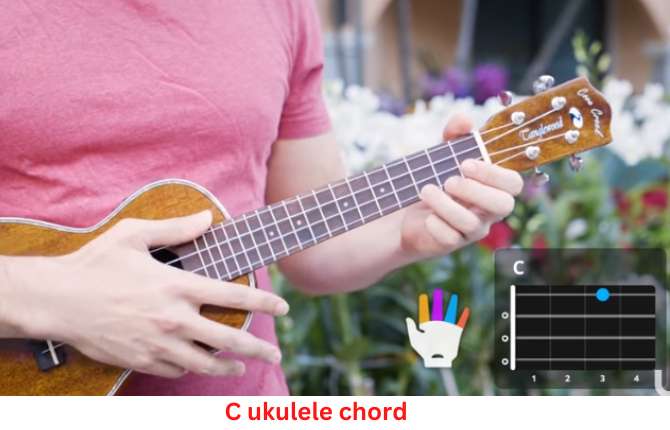 There’s no question about the matter that the C ukulele Chord is one of the most extensively used chords in music. So, you need to master how to play it on an instrument. Further, it’s multipurpose, and you’ll find it in numerous pop and rock songs, including other genres.

Honestly, one of the easiest chords to play on the instrument is the standard C chord shape. If you want to explore how to play C major chords on the ukulele, read this lesson well. The reason is that the guide runs into different voicings and shapes to ring on the uke with various songs using the C chord.

Basics of the C Major Chord on Ukulele

Before learning to play C chords on a ukulele, it may be effective to know how this chord generally works. Chords essentially consist of a group of notes that are played together rather than individually.

You’ll also find different chord types, such as major, minor, diminished, major 7th, etc. The notes making up a chord and the intervals between them are exceeding what fixes if a provided chord is a minor chord, a major chord, or other chord types.

What Type of Chord is the C chord?

The C chord belongs to a major chord, meaning this chord runs on a major scale. It’s also useful to talk about triads, usually building the base of most chords. It’s the triad consisting of three notes (other chord voicings might contain more than 3-notes too).

We may consider trios as the forming blocks of chords. A major trio has comprised the root, 3rd, and 5th notes from a provided scale. The 3rd in the major trio typically features a major 3rd.

What notes make the C chord?

The basic C chord is built up of the notes C, E, and G. Usually, we utilize four strings together while playing chords on a ukulele. The standard C ukulele chord is again formed of the notes G, C, E, and C and strummed an octave higher.

How to Play the C Chord on Ukulele 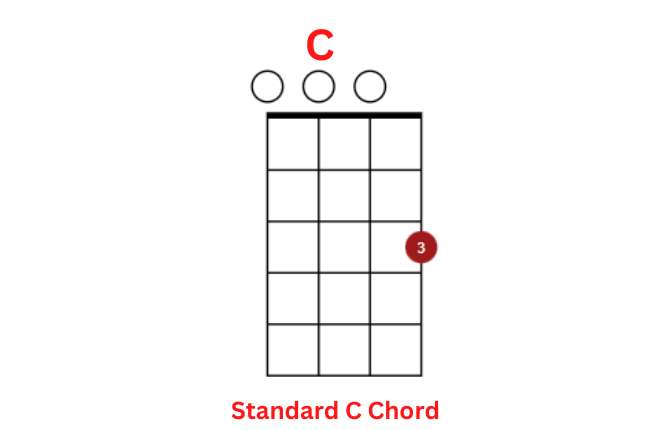 It’s the most general voicing for playing the C major chord on the ukulele. Luckily, playing it is very straightforward. Fret only the A string at the third fret, leaving the rest of the strings open. Most players utilize their 2nd or ring finger to ring a high C on this chord.

Since this chord contains such a simple shape, playing it on the uke is one of the most straightforward chords. The fingers you don’t fret while playing this chord should keep careful not to touch the open strings unexpectedly as you strum. 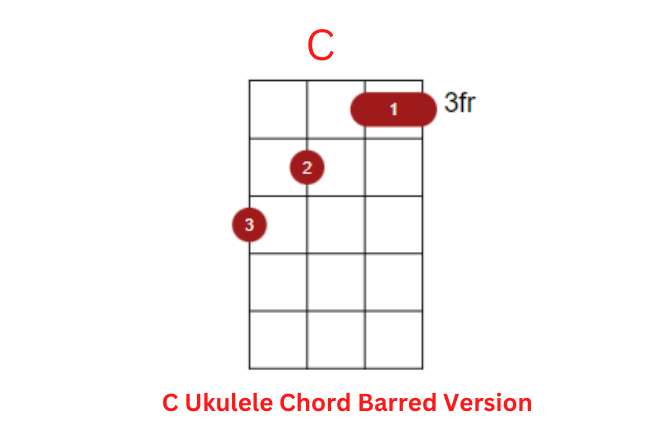 This version will deliver a powerful and loud sound compared to playing with open strings. You need to fret the C string with your 2nd finger, the G string with your ring finger, and the top 2-strings with your pointer finger.

To accomplish it correctly, all you have to do is to bar the string, meaning utilizing your finger to fret across multi-strings together (from your fingertips).

In the case of being new to the ukulele, it can become tough to play barre chords. You might understand that your fingers begin to feel tightened after attempting to tackle the barre chords for the first time.

The best thing you might do to resist it is to become your arm muscles more accustomed to this style of play, so continue practicing patiently!

This Chord Variation – Higher on the Neck 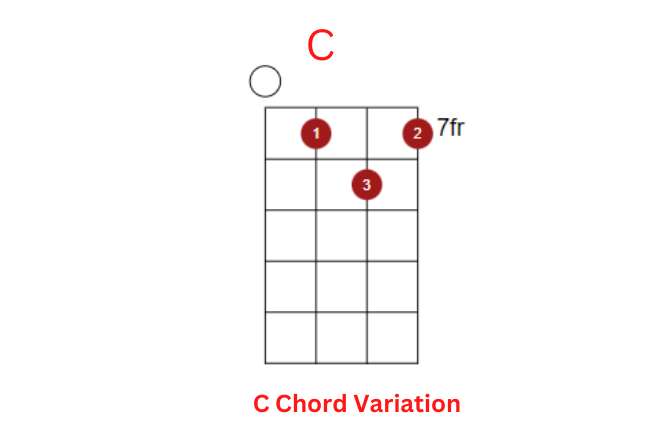 With a nice ringing quality, it features a variation on a standard C chord. You might observe that this variation contains the same shape as the standard G chord on the ukulele, and playing it higher at the seventh fret is possible for you.

Songs that Use this Chord

As told earlier, various types of classical music are played using the C chord. We’ve mentioned three among them for your practice below:

The Boxer by Simon and Garfunkel: The Boxer, a simple and heart-touching ballad, runs on a pretty straightforward chord progression and contains a general feeling of folk and country music.

Okay, the thing we trust strongly is that it is a simple lesson to learn for you. Hopefully, you can master this lesson on the C ukulele chord effortlessly.

Finally, keep on practicing to learn because it’s one of the essential chords to become skillful on the ukulele.