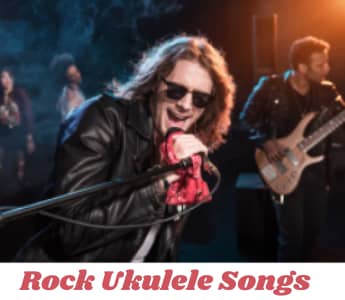 Sometimes you just think of rocking your brain. You look for some rock songs for that purpose. So, we have also come up with some rock ukulele songs for you. Now, you may be wondering if it is possible with a ukulele, but we will say why not.

Indeed, with the advent of the electric steel string ukes, what is originally possible with a mini electric guitar, it is easy to play songs like punk, metal, grunge, pop-rock, and other heavy genres with ukuleles.

It is even possible to cover rock songs if you own one simple, acoustic ukulele and if you have a free mind and some clever cognitions.

However, we’ve put together some easy and classic rock ukulele songs to play on the ukulele here.

Chords for This Song: A, Bm, D

About 29 years ago, 4 Non-Blondes released their 1993 classic rock song “What’s Up,” and the song has reached a new milestone in hit.

Rightly, the song’s lyrics do not show the title, but the phrase “what’s going on?” has notably appeared in the chorus.

Surprisingly, you can play this easy rock ukulele song using just 3-chords like A, Bm, and D. So, hold your ukulele and start learning this popular rock song.

2. “All Along The Watchtower” By Bob Dylan/Hendrix

Chords for This Song: Am, G, F

“All along the Watchtower” is one of our favorite rock ukulele songs of all the songs that we recommend to play for beginners. The song’s descending/ascending chord progression with a minor mood seems like a total win.

Dylan sang this song in concert compared to any of his other songs. The track is also available in four different versions.

If you don’t attempt this song before, it will be a superb tune for you to begin. Also, 3-chords even will not be an issue to continue your task.

3. “I Won’t Back Down” By Tom Petty and The Heartbreakers

In my opinion, not listing Tom Petty’s songs in the list of classic rock songs means an incomplete list.

His rock-solid lyrics and catchy melodies, combined with functional, easy musical instruments make it easy to run a believable version of “I Won’t Back Down” on your ukulele.

This song runs using a simple chord progression. It is a fantastic starter song if you have a previous idea about the Em chord use.

Changing the position of the offbeat cord is the hardest part. Keep on your practice along with the recording as long as you can’t do it.

Describing the endurance of the iconic band “As You Are,” it is a suitable song to play for calming yourself.

When you play this song on the ukulele, it misses some of its sharp edges but acquires a subtle, exciting tone, ideal for restless nights and rainy mornings.

This track has an alternative rock feature, which runs for three minutes and thirty-eight seconds. Its composition feature is in the key of E minor with a heavy rock tempo of 120 beats per minute.

You can try to be accustomed to it if you don’t do it before.

The song explains the impacts of gospel music, and its song words highlight spiritual aspirations.

This song becomes a perfect choice for jam sessions. Therefore, you include this song in your 3-chord song list. It’s very straightforward and fun.

“21 Guns”, a song by American rock band Green Day appeared in 2009. This song highlights the issue of patriotism in an arena rock ‘n’ roll sort of way.

There’re a lot of chords in this song. So, beginners can seem to be troublesome. Once it is possible to master, it’ll become easy, of course.

If this song already does not have your collection, you gather it. Then start practicing and carry on until you can become accustomed to it.

If you’re looking for a bit hard rock song, “Everlong” can be your desired one. In reality, this song is hard enough to include on our list of rock ukulele songs so far.

Foo Fighters brought this song to the market in 1997. You require a lot of chords to play on the ukulele. So, if you crave to learn this song, you need to start carefully and keep practicing step-by-step.

To make your effort successful, we have included a tutorial below. If needed, follow it.

8. “Down On The Corner” By Credence Clearwater Revival

“Down on the Corner” by Creedence Clearwater Revival on the studio album Willy and the Poor Boys was revealed in 1969. It is another easy rock ukulele song.

The lyrics tell about the story of the fictional band Willy and the Poor Boys and their playing on street corners to encourage people and ask for nickels.

Three chords like C, G, and F are sufficient to strum on the ukulele. So, all classes of players can endeavor to go with it.

9. “Paint It Black” by The Rolling Stones

It might seem somewhat strange the possibility of listening “Paint it Black” without Brian Jones’s iconic sitar-playing. Still, you can rest assured that the song is excellent enough to hear with the ukulele.

Rightly, this song features the same recurring chords, but you will find exciting changes in speed. Ukulele-lovers of all skill levels keep their ukulele rock song choice lists.

Maybe, several chords are necessary for playing it, yet you can do it if you have patience.

10. “Under Pressure” by Queen and David Bowie

A duet by legends Queen and David Bowie is “Under Pressure,” although it was first revealed as a single in October 1981. Many narrated as a poignant and powerful pop songs.

It is a winning song for playing on the ukulele when you pass through a hard time in life.

It is a song of 5-chords, which might become somewhat for new players. So, appropriate practice is essential to master it.

The English punk rock band The Clash brought “Should I Stay or Should I Go” to the audience on the album Combat Rock in 1982.

There have been several rumors surrounding the song’s content, for example, Jones’ upcoming dismissal from the Clash or the strained personal relationship between Jones and American singer Ellen Foley.

You can start playing on your ukulele. Also, simulate the power and dramatic breaks of The Clash, and you will soon think of yourself as a rock star.

“All the Small Things” became a big hit song after its release in 2000. Delonge penned the track for his then-girlfriend Jennifer Jenkins. But, it does not need to think that it is only a love letter to Jennifer.

The chord progression for the song is C major, F, and G, which is very familiar. So, this song is absolutely a beginner-friendly tune. A player who is getting started playing the ukulele can try to go with this melody.

13. “Eleanor Rigby” by The Beatles

“Eleanor Rigby” kept on the Beatles’ transition from a predominantly rock and roll- and pop-based performance to a more experimental, which was studio-based band.

This song describes the unfortunate tale of early death and characterizes a separate instrument – in this case, the violin instead of the sitar.

This track does not become less suitable for a ukulele. Besides, in the spooky, sharp chords of the song, there’s a dark side to the uke that doesn’t find sufficient pressure.

14. “Octopus’s Garden” by The Beatles

One of Ringo’s impeccable creations with the Beatles is Octopus’s Garden, a surprisingly fun and well-composed song. The song will penetrate deep into your consciousness while playing because it is peaceful.

Players need 4-chords to play this song. Overall, this track becomes suitable to play on the ukulele, including short sections, rhythmic breaks up, jamming out, and creating variations.

One of David Bowie’s earliest and most notable songs is “Space Oddity.” A tragic lyric about an astronaut who encounters technical problems in space.

There are a lot of chords in this track to play it. Those chords can make a vibe of uncertainty, guaranteeing your coolness. Honestly, playing this song without passion is somewhat cumbersome.